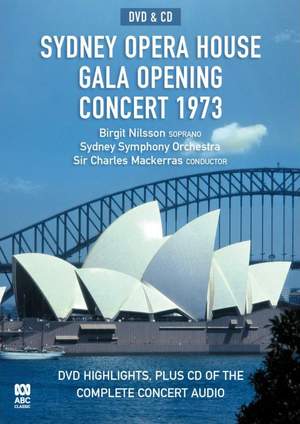 Australia’s musical landscape changed forever on the evening of 29 September 1973, when the brand-new Sydney Opera House opened the doors of its Concert Hall to the public for the first time.

In front of a packed, emotion-charged house, the great Australian conductor Sir Charles Mackerras made a triumphant homecoming in an all-Wagner concert that sent the critics searching for superlatives.

ABC Classics is proud to release on DVD the original television footage of highlights from the concert, accompanied by the complete audio from the occasion on CD. Featuring the greatest Wagnerian soprano of the 20th century, Birgit Nilsson, as soloist, this was an electrifying opening for the iconic building.

Forty-six years on, the excitement of that magic night is still palpable, and Mackerras’ ability to bring the best out of the Orchestra of which he himself had once been a member remains awe-inspiring. A priceless memento of one of the greatest days in Australian music, this DVD+CD package captures two master-artists at the height of their creative powers with an orchestra playing at its peak.