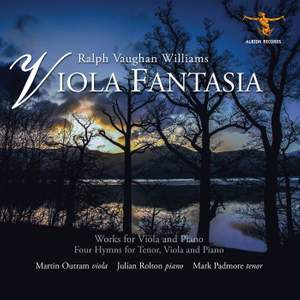 Outram catches poetically the vein of pastoral contemplation which runs through the first five of the Six Studies in English Folksong, and turns in a puckish ‘As I Walked Over London Bridge’... — BBC Music Magazine, August 2019, 4 out of 5 stars More…

6 Studies in English Folk Song (Version for Viola & Piano): No. 1, Adagio [Lovely on the Water]

6 Studies in English Folk Song (Version for Viola & Piano): No. 4, Lento [She Borrowed Some of Her Mother's Gold]

6 Studies in English Folk Song (Version for Viola & Piano): No. 5, Andante tranquillo [The Lady and the Dragoon]

6 Studies in English Folk Song (Version for Viola & Piano): No. 6, Allegro vivace [As I Walked Over London Bridge]

Martin Outram (Viola) and Julian Rolton (piano) play all of the works of Ralph Vaughan Williams for viola and piano. Mark Padmore (tenor) joins them to record Four Hymns for Tenor, Viola and Piano.

Ralph Vaughan Williams (1872-1958) learned the piano and violin from an early age, but took to the viola while still at school and continued to play it all his life; this instrument is associated with his most romantic and impassioned music. His contemporary, the great viola virtuoso Lionel Tertis, was the inspiration for two of the works presented here.

The Suite for Viola and Small Orchestra was premiered by Tertis in 1934, soon followed by a viola and piano edition. The eight movements of this lively work mainly represent dances. The short but lovely Romance is thought to have been written for Lionel Tertis at approximately the time of the First World War. It was apparently never performed and was found after the composer’s death.

The Six Studies in English Folk Song, dedicated in 1926 to the cellist May Mukle, were produced in alternative versions for cello, viola, violin and clarinet, all with piano. Folk songs were important to Vaughan Williams, who collected many of them, and this work is based on six of them. This work in turn led on to a Fantasia on Sussex Folk Tunes for cello and orchestra, dedicated in 1929 to Pablo Casalls. John Lenehan published a piano reduction of the piano part and Martin Outram has adapted the cello solo part for the viola. The Fantasia on Greensleeves derives from VW’s 1928 opera, Sir John in Love. Based on a well-known tune, possibly of the Tudor period, at incorporates another folk song, Lovely Joan.

The Four Hymns for Tenor, Viola and Piano date from just before the first world war. Based on texts dating from the 17th to the 20th century (by Bishop Jeremy Taylor, Isaac Watts, Richard Crashaw and Robert Bridges), they are weighty in mood and rise to feelings of religious ecstasy. Martin Outram plays the viola with the internationally renowned Maggini Quartet. He has recorded over 50 discs and has received a Gramophone Award, the Diapason d’Or, a Cannes Classical Award, three Grammy nominations and the Royal Philharmonic Society Award for chamber music.

Julian Rolton has worked as a pianist with the Calgary Philharmonic Orchestra in Canada, performed concertos by Britten, Shostakovich and Strauss in the South Bank Centre, London and Kagel’s Phantasiestcke with Martyn Brabbins and Sinfonia 21 at the Ars Musica Festival in Brussels. He was a member of the Chagall Trio which released an acclaimed premiere recording of works by Ethel Smyth on Meridian. Martin and Julian together have made recordings of works by Rawsthorne, Bliss and Arnold Bax, and a disc titled The English Viola.

Mark Padmore has established an international career in opera, concert and recital. His appearances in Bach Passions have gained particular notice, especially his renowned performances as Evangelist in the St. Matthew and St. John Passions with the Berlin Philharmonic Orchestra and Sir Simon Rattle, staged by Peter Sellars. In opera Mark has worked with directors Peter Brook, Katie Mitchell, Mark Morris and Deborah Warner.

In concert Mark performs with the world’s leading orchestras. He was Artist in Residence for the 2017-18 Season with the Berlin Philharmonic Orchestra and held a similar position with the Bavarian Radio Symphony Orchestra for 2016-17. His work with the Orchestra of the Age of Enlightenment has involved projects exploring both Bach St. John and St. Matthew Passions and has attracted worldwide acclaim. Mark has performed all three Schubert song cycles in Amsterdam, Barcelona, Birmingham, London, Liverpool, Paris, Tokyo, Vienna and New York.

Mark was voted 2016 Vocalist of the Year by Musical America and was awarded an Honorary Doctorate by Kent University in 2014. He is Artistic Director of the St. Endellion Summer Music Festival in Cornwall.

Outram catches poetically the vein of pastoral contemplation which runs through the first five of the Six Studies in English Folksong, and turns in a puckish ‘As I Walked Over London Bridge’ to cap the cycle…[Padmore’s] virtually evangelical approach makes his performance of the Four Hymns special.

This latest anthology from those enterprising folk at Albion Records launches in fine style with the endearingly personal Suite that Vaughan Williams fashioned for the great viola virtuoso Lionel Tertis…Martin Outram and Julian Rolton [are] as acutely responsive to the pensive musings of the substantial ‘Ballade’ and radiant lyricism of the ‘Musette’ as they are to the quirky mischief of the ‘Polka mélancolique’ and high jinks of the boisterous concluding ‘Galop’.

The Maggini Quartet’s viola player, Martin Outram, has put together a rare and beautiful programme of less familiar Vaughan Williams...The neglected Four Hymns are given vivid, trenchantly enunciated performances by the tenor Padmore.