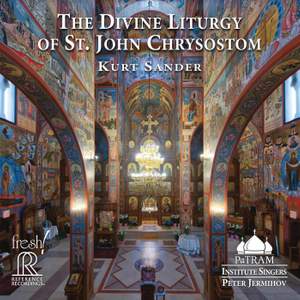 No. 12, Litany after the Gospel

No. 13, Litany of the Catechumens

No. 14, Litany of the Faithful

No. 15, Second Litany of the Faithful

No. 21, Litany Before the Lord's Prayer

No. 24, Praise the Lord from the Heavens

No. 25, Blessed Is He That Cometh in the Name of the Lord

No. 26, Receive the Body of Christ

No. 28, Let Our Mouths Be Filled with Thy Praise

A gorgeous new recording from the PaTRAM Institute! They are rising choral stars whose debut album (Chesnokov: Teach Me Thy Statutes (FR-727SACD) recently garnered a Grammy® nomination for Best Choral Performance. The music performed on this new recording of Russian Orthodox choral music in the English language was written by Dr. Kurt Sander. Conductor Peter Jermihov writes: 'The Liturgy of St. John Chrysostom by Kurt Sander is unique in several respects. Within the body of repertoire contained in the Russian-based jurisdictions of North America (Moscow Patriarchate, Russian Orthodox Church Outside of Russia, and the Orthodox Church in America), it is the first and only complete setting of the Liturgy of St. John Chrysostom in English. Rooted in the 19th Century Russian models of such masters as Tchaikovsky, Rachmaninoff, Gretchaninoff, and others, Sander’s Liturgy grows out of the monumental choral edifices of these masters and rightfully belongs in their midst'.