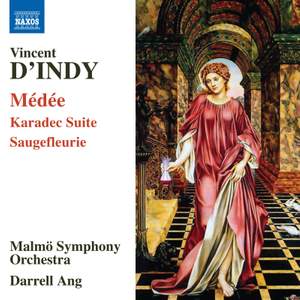 The playing of the Malmö Symphony Orchestra under Darrell Ang is vividly expressive and the recording is first-class. — Gramophone Magazine, July 2019

Described by Gabriel Fauré as the ‘Samson of Music’, Vincent d’Indy enriched French musical culture considerably as it made its transition into the 20th century. His orchestral works in particular demonstrate great skill and creativity, with his eclectic style often drawing inspiration from other composers, especially Wagner. At other times his music integrates Gregorian chant or French folk tunes, as in two of the works that feature on this recording, Médée and Karadec, both drawn from his incidental music for plays. Based on a poem about a lonely fairy, d’Indy’s superbly crafted symphonic poem Saugefleurie is permeated by Wagner’s influence while remaining quintessentially French.

The playing of the Malmö Symphony Orchestra under Darrell Ang is vividly expressive and the recording is first-class.