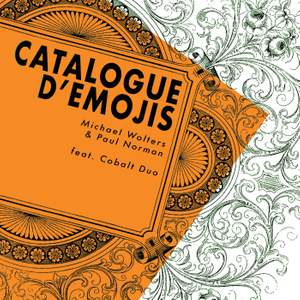 Emojis have become part of our lives. They are a comparatively recent addition, but their look and style as well as their use has shaped communication in our digital world. They are a pictorial, symbol-driven language and, in this way, quite close to the language of music notation. While using an emoji instead of a word makes communication more abstract, it also opens space for ambiguity and playfulness. Catalogue d’Emojis explores this ambiguity and playfulness in the communication between composer and performer.

It is a fascinating multi-layered “concert event”. “Concert” emphasises the fact that it is a through-composed piece of music, while “event” relates to the FLUXUS idea of the “event score” and the fact that the performance is an extraordinary blend of sumptuous piano music, story-telling in yoga position, pseudopoetry, a presentation on vegan music and much more! There is an emoji-based internal logic that holds everything together.

Fumiko Miyachi and Kate Halsall, who together make up Cobalt Duo, are both ‘inspirational’ (Tempo) internationally-performing pianists who specialise in contemporary repertoire and interdisciplinary projects, often using technology. Michael Wolters and Paul Norman are internationally acclaimed composer-performers who specialise in creating unconventional events and performances. Wolters, whose music has been described as ‘utterly beguiling’ (Tempo) and ‘oddly moving’ (Guardian), creates works that deconstruct and question the traditional concert situation or which are designed for performance outside the concert hall altogether. In 2008 he soundtracked the BBC News live, and in 2012 he made a large-scale performance taking place on and around a German ice rink. For Norman, composing becomes a way of trying to understand little bits of the world and a way to highlight intriguing situations. In his work the audience is often encouraged to ask questions and to make decisions through the use of text-scores.