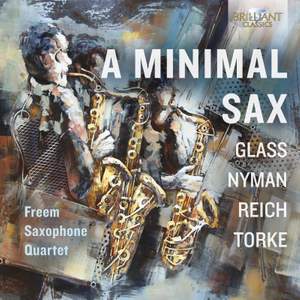 ‘A Minimal Sax’ takes a journey through the last 30 years of minimalist music, one of the most influential artistic movements of the last century. An accomplished young Italian ensemble takes us from the purism of New York Counterpoint by Steve Reich through the soulful strains of the Saxophone Quartet by Philip Glass, to the funky rhythms of Michael Torke’s July and the catchy off-beats of Michael Nyman’s Second String Quartet, in a version for saxophones which here receives its world premiere recording.

Back in 1968 it was Nyman who coined the term Minimalism, in an article for The Spectator, to describe music by composers such as Cornelius Cardew that could be relied upon for its effect in clearing a listener’s mind. ‘Simple idea, straightforward structure, intellectual control, theatrical presence and intensity in presentation’: these were the other criteria he applied to music or at any rate musical events masterminded by Nam June Paik and the ‘Naked Cellist’, Charlotte Moorman.

By that point, Reich and Glass had already been writing influential pieces such as It’s gonna rain which shared the qualities listed by Nyman. Their works for saxophone date from later in their careers, once Minimalism had been established as an unstoppable cultural force that had brought millions of young listeners into concert halls. They were attracted by the hypnotic repetitions that are a trademark of these pieces, particularly suited to the medium of saxophone quartet, but even more to the rhythmic rigour and fresh yet recognisable harmonies shared by all four works here.

Founded in 2017, the Freem Saxophone Quartet comprises four recent graduates from distinguished Italian conservatoires who have already played in festivals and concert halls the world over. As an ensemble they perform the established repertoire for saxophone quartet and commission a great deal of new music. This is their debut album.