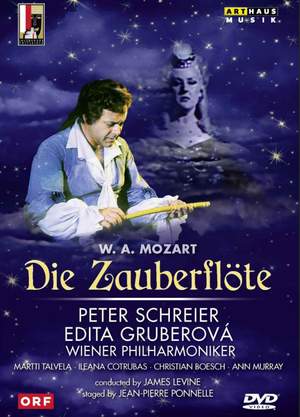 This 1982 production of Mozart’s Magic Flute received enormous and unanimous approval, when it was premiered in Salzburg. Endless applause on the night and an unusual state of accord from the international press where enthusiastic reviews soon gave this staging the status of a legend.

Of course, none of that would have had the same appeal if it had not been in accord with Mozart’s music, performed with perfect blend of lightness and pathos, humour and profundity, by James Levine and the Vienna Philharmonic Orchestra; nor would it all have worked without a truly Festival-worthy cast of singers: the Finnish bass Martti Talvela, who departed way too soon in 1989, in his famous role as Sarastro, the incomparable Edita Gruberová as “the best-ever Queen of the Night” (Frankfurter Allgemeine Zeitung), the legendary Tamino Peter Schreier as well as the petite, lyrical soprano Ileana Cotrubaș as Pamina. Further, Christian Boesch, who sang the role of his life with Papageno, was credited most for his performance in this legendary Zauberflöte.