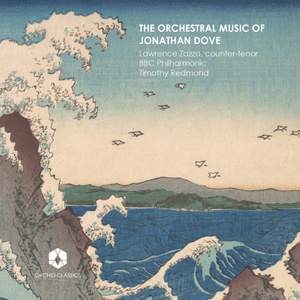 The Orchestral Music of Jonathan Dove

Each of these five pieces has a direct dramatic appeal that nonetheless speaks to the composer’s love of theatre…While Dove’s gift for colour and tempestuous aural spectacle remains palpable,... — BBC Music Magazine, August 2019, 4 out of 5 stars More…

Dove: Run to the Edge

Dove: Hojoki (An Account of my Hut) for counter-tenor and orchestra

To mark the 60th birthday of British composer Jonathan Dove, Orchid Classics presents an album devoted to his extraordinary orchestral music, performed by the BBC Philharmonic. Under the direction of Timothy Redmond, the BBC Philharmonic performs works which span nearly two decades, from The Ringing Isle of 1997, to Gaia Theory, premiered at the BBC Proms in 2014. The Ringing Isle was inspired by Handel’s observation about the bells he heard upon arriving in England; Dove uses bell-ringing patterns and allusions to Gaunt’s famous ‘scepter'd isle’ speech from Shakespeare’s Richard II. Other highlights include Run to the Edge, a thrilling, vibrant work bursting with energy and colour; Airport Scenes, extracted from Dove’s comic opera, Flight; and Hojoki, a setting of a Japanese text which, appropriately, reflects on the significance of reaching the age of 60, and is sung here by countertenor Lawrence Zazzo, who gave the work’s premiere.

Each of these five pieces has a direct dramatic appeal that nonetheless speaks to the composer’s love of theatre…While Dove’s gift for colour and tempestuous aural spectacle remains palpable, it’s most strikingly encapsulated in the earlier, shorter works: Run to the Edge (2003) and The Ringing Isle (1997) combine Britten-esque bells and Adams-esque propulsion to whirlwind effect.

All are testimony to his piquant instrumental palette and ability to write chamber music in the context of expansive canvases, dazzlingly orchestrated and played. Redmond is a passionate advocate.

Dove paints his images with such skill, the hints of Wagner and John Adams never concealing his own personality… An enjoyable anthology of sophisticated, accessible contemporary music.