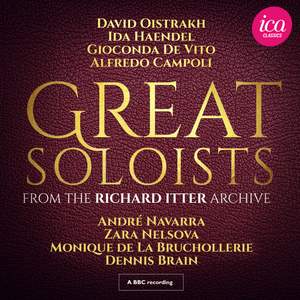 Hearing these distinguished performances on the wing makes for an invigorating listen. There are no surprises in Oistrakh’s consummate mastery in the Tchaikovsky, but the tight orchestral playing,... — BBC Music Magazine, October 2019, More…

This release has been sourced from the Richard Itter Archive of ‘live’ BBC recordings. The collection is very important for collectors because it has never been on the market before. Following the archive’s launch in October 2017 with successive releases featuring Beecham, Böhm, Cantelli, Casadesus, Karajan, Menuhin, Monteux, du Pré, Klemperer, Rostropovich and Walter, it has received universal praise from both the classical media and record collectors for the excellent sound and performances. These four discs document an amazing array of concerto soloists, caught at various stages of their careers in the four years 1953-56. Among them are several with claims to be the finest exponents of their particular concertos - notably David Oistrakh playing the Tchaikovsky Violin Concerto in a broadcast from the BBC Studios in 1954, and Dennis Brain in two Mozart Horn Concertos from 1953 & 1954 respectively along with Strauss’s Horn Concerto No.1, from 1956.

Hearing these distinguished performances on the wing makes for an invigorating listen. There are no surprises in Oistrakh’s consummate mastery in the Tchaikovsky, but the tight orchestral playing, under Sargent adds to the coherence and thrust…Dennis Brain shines through in Mozart and Richard Strauss.