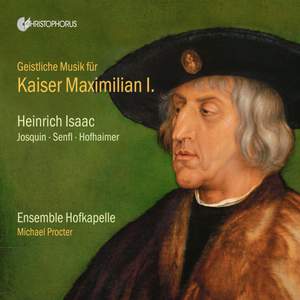 On 19 January 1519 - 500 years ago - Maximilian I, archduke of Austria, German king and Holy Roman emperor (1493–1519) died. With his policies of war and marriage, Emperor Maximilian I laid the foundations upon which the Habsburgs rose to become a great power. In addition to extending his power base, he promoted science and the arts and stylized himself as the ‘last knight’. He founded a court chapel around the composer Heinrich Isaac and gathered the most famous musicians of Europe.

The program on the first CD presents motets by Isaac, Senfl and Josquin which are written for different sacred occasions at the Maximilian Court.

The second CD presents two Marian Masses composed for Maximilian by Isaac. The first one is set for four voices and Maximilian must have liked it very much because he tasked Isaac to revise it into a six voice mass.

The Ensemble Hofkapelle present these two masses in alternation first with Gregorian chant and the second mass with organ improvisations in the style of Paul Hofhaimer, Maximilian’s famous court organist.