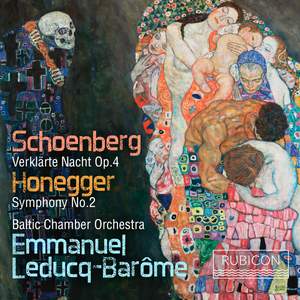 The concluding bars of the Honegger…sound particularly thrilling in this performance which packs a mighty punch in the earlier disorientating and frenzied energy of the Finale. Leducq-Barôme... — BBC Music Magazine, September 2019, 3 out of 5 stars (Performance) / 5 out of 5 stars (Recording) More…

Honegger: Symphony No. 2 for string orchestra and trumpet

Schoenberg’s early String Sextet ‘Verklärte Nacht’ (Transfigured Night) op.4 dates from 1899. He made the arrangement for string orchestra in 1943. It is a work heavily indebted to Wagner, and especially ‘Tristan und Isolde’ although the unique voice of Schoenberg is already apparent.

‘Gurrelieder’ and ‘Pelleas und Melisande’ would bring the curtain down on his late romantic period and the daring atonal music that has caused him to remain a musical bogey man for many would follow. Verklärte Nacht is a wonderful, intensely moving work and the ideal introduction to this great composer.

Honegger , famous today for his depiction in music of an express steam locomotive ‘Pacific 231’ and the game of rugby in the eponymous work for orchestra composed five symphonies. The second is scored for strings and trumpet . Composed for Paul Sacher and his Basel Chamber Orchestra it was written during the darkest years of World War II. The Nazis had banned Honegger’s music and he was branded as ‘leftist’, composing music for films for resistance cinema. It is a powerful work with a lament -like central slow movement and an energetic choral theme in the finale providing a sense of triumphant resolution.

The Baltic Chamber Orchestra’s first release for Rubicon – Strauss Metamophosen and Shostakovich Chamber Symphony was praised by the BBC Music Magazine and made an orchestral CD of the month upon release. This new album looks set to receive a similarly positive reception.

The concluding bars of the Honegger…sound particularly thrilling in this performance which packs a mighty punch in the earlier disorientating and frenzied energy of the Finale. Leducq-Barôme and the Baltic Chamber Orchestra are also impressive in the more reflective moments of the Symphony.

Tempo choices and pacing are key for a score [the Honegger] in which broad themes and looping chants are often laid over faster, more mechanical material…No problems there, and Emmanuel Leducq-Barôme finds a special atmosphere in the slow middle movement.