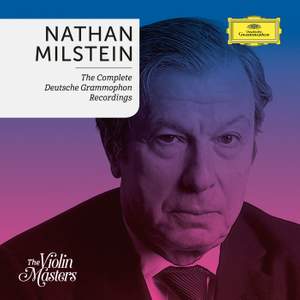 Hopak (Arr. For Violin and Piano)

Nathan Milstein is widely considered one of the finest violinists of the 20th century and was known for his interpretations of Bach's solo violin works and for works from the Romantic period. He was also known for the longevity of his career – his artistry remained at a remarkably high standard up to retirement, and Milstein’s Deutsche Grammophon recordings, made at the end of his career, perfectly capture an artist who remained at his peak well into his 80s. Milstein arranged many works for violin and wrote his own cadenzas for many concertos, such as the Brahms heard here. He excelled in the Italian Baroque composers, Bach, Mozart, Beethoven and Mendelssohn. Honours were even in Lalo, Brahms and Tchaikovsky and particularly in Glazunov. In his youth, Bach was not high on the list of composers studied in Russia, yet Milstein became one of the most acclaimed exponents of his works as can be heard in these recordings. A recital disc for DG includes the violinist’s own Paganinana, one of his best-known compositions, a set of variations on various themes from the works of Niccolò Paganini.