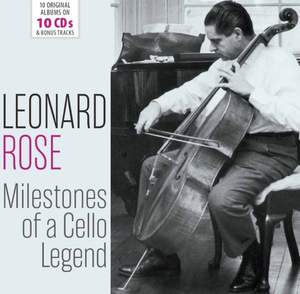 trad.: The Garden Where the Praties Grow

trad.: The Rose of Tralee

trad.: A Little Bit of Heaven

trad.: When Irish Eyes Are Smiling

Greene, E: Sing Me to Sleep

Leonard Rose was an immensely significant and formative figure among Cellists in the 20th century. He made music history as a soloist, chamber musician and teacher alike. Born to Russian-Jewish immigrants in the US, he started a major international career in the 1950s and went on to become the most important American cellist of his time. Equally outstanding was his work as an educator, namely at the Curtis Institute and the

Juilliard School. Erich Leinsdorf, chief conductor of the Boston Symphony Orchestra, briefly called the "cello" section of his orchestra "Rose Section", as seven of its members had been Rose’s students. The New York Times added that five of the cellists in both the Philadelphia Orchestra and the New York Philharmonic, as well as six in the Cleveland Orchestra, had received crucial impulses for their careers through Rose.

Yo-Yo-Ma also decided that none other than Rose would qualify as his teacher. So the nine-year-old, a quarter-cello under his arm, appeared in Isaac Stern's apartment, where the trio Stern-Istomin-Rose rehearsed, and asked to audition - the rest is history. This box and its 10 original albums from the years 1945 to 1961 plus numerous bonus tracks is honoring a great musical personality. Rose is accompanied here by such greats as