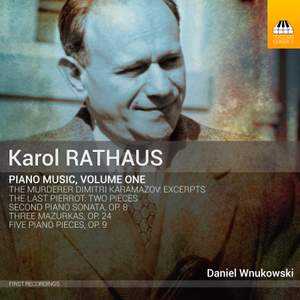 Wnukowski strikes me as an ideal advocate for this music. He is more than equal to its technical demands, and he brings subtle gradations of dynamics and shading to what could easily become an... — Fanfare, September/October 2019 More…

Karol Rathaus (1895–1954), born on the eastern fringes of the Austro-Hungarian Empire, was one of the myriad Jewish composers who had to abandon a successful career in Europe, where he wrote for stage, screen and concert hall, and flee to the USA; there he earned his living in academia, working in obscurity. This first recording of his piano music reveals a powerful and individual voice, where echoes of his distant homeland color a musical language that is striking for its harmonic tension and rhythmic energy. Hailed as “rapturous and glowing” by International Record Review and “an inspirational and devoted pianist” by Life & Arts – Financial Times, Polish-Canadian pianist Daniel Wnukowski has performed throughout Europe, North America, South America and Asia in prestigious concert halls. He has performed with many orchestras, including the Polish Radio Orchestra, Sinfonia Varsovia, Windsor Symphony, Orchestra Filarmonica Marchigiana, Poznan Philharmonic, Arthur Rubinstein Philharmonic with conductors such as Jerzy Maksymiuk, Alain Trudel and David Amos. He has also performed in numerous International Festivals such as Chopin and His Europe in Warsaw, Poland; Festival Dei Due Mondi in Spoleto, Italy; Chopiniana in Buenos Aires, Argentina; and the Pre-LSO Concert Series in London, UK.

Wnukowski strikes me as an ideal advocate for this music. He is more than equal to its technical demands, and he brings subtle gradations of dynamics and shading to what could easily become an overwhelming welter of sound. More importantly, Wnukowski communicates the emotions within the music. I was moved at several points throughout the recital. Add Georg Burdicek’s expert sound engineering, which captures the full dynamic and color range of the Bösendorfer Imperial, into the mix, and this recording is a definite keeper. It is also a crucial addition to the library of anyone interested in interwar German music, Jewish composers, or music that packs an emotional wallop.