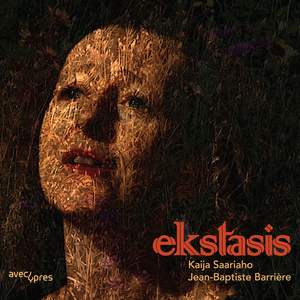 Sensory correspondences, displacement of the imaginary, reversal of perspectives: it is to such an experience that ekstasis invites you, a musical recording and multimedia object constructed from sound and image centred on six works by Kaija Saariaho and Jean-Baptiste Barrière. The complementarity of the Finnish composer and the French composer and filmmaker, living together and often working together, shape the fairly precise organization of the work featured in this album. The three works by Kaija Saariaho are musical compositions, sonic, acoustic and electronic constructions, which already existed before her husband unfurled his vision of them.

Complexity inside them can have the transparency of the dragonfly. The three pieces by Jean-Baptiste Barrière were conceived as multimedia works, and primarily for a visual concert, with lines and rhythms that are perhaps more direct, leaving spaces open for receiving the images.

The 6 pieces of the CD and their images