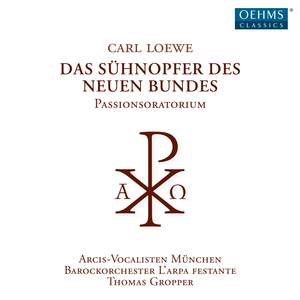 While Bach’s example can be detected, so too can Handel’s influence be heard in the grander scenes; and, of course, one is constantly reminded of Mendelssohn’s soundworld. Thomas Gropper and... — Choir & Organ, July 2019, 4 out of 5 stars More…

The composer (Johann Gottfried) Carl Loewe is familiar to music lovers of the 20th and 21st centuries above all as the writer of important ballad scores, of which Edward, Erlkönig, Herr Oluf and Archibald Douglas are well-known examples. His songs Die Uhr or Heinrich der Vogler were popular hits, especially in a bygone heyday of salon music and educated bourgeois culture. Loewe wrote more than 400 songs. But the same Carl Loewe also wrote six operas, two symphonies and two piano concertos as well as a total of 17 sacred and secular oratorios, all of which have fallen into oblivion.

While Bach’s example can be detected, so too can Handel’s influence be heard in the grander scenes; and, of course, one is constantly reminded of Mendelssohn’s soundworld. Thomas Gropper and his forces take a straightforward approach to Loewe’s score, with the chorus delivering their contribution with conviction and an attractive, even tone. With decent if not outstanding soloists, this release is certainly worth investigating.

If Loewe’s blend of hand-me-down Bach and Schumann appeals, this new recording offers every incentive to investigate further.

The sincere but somehow understated spirituality has a way both of commanding respect and of drawing you in.