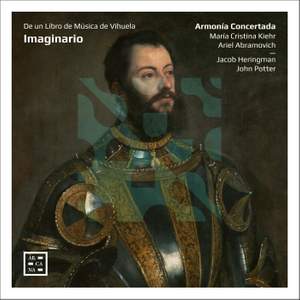 Kiehr has a ceramic glaze to her delivery: smooth and cool on the surface but warm and pleasingly textured underneath. Her dark vowels create a rich tone that never falters… Undercutting all... — Gramophone Magazine, June 2019 More…

The brilliant soprano María Cristina Kiehr, together with lutenist-vihuelist Ariel Abramovich, presents her first solo album devoted to Renaissance music. With her broad experience in sixteenth-century polyphonic repertoire (in La Colombina and Ensemble Daedelus, among others), and a project almost completely using her native language, Kiehr brings to the music of Spain’s Golden Age her own unique perspective.

Imaginario reconstructs an imaginary and unknown book of vihuela songs, inspired by the seven marvellous books published between 1536 and 1576, but this time as if published in Valladolid or Seville between 1570 and 1580. Constructed in the shadow of the earlier books, each one of its songs makes reference either in its music or text to another song from those earlier books.

The vihuelist Jacob Heringman, together with whom Abramovich created and recorded Cifras imaginarias (Arcana A428) is also part of this project, together with the mythical British tenor John Potter, ex Hilliard Ensemble and ECM artist, who performs an enigmatic piece for tenor and vihuela.

A unique project, in every sense of the word, this stretch of the imagination takes the recorded repertory of the Spanish Renaissance one step further, venturing into the world of musical fiction based on a blend of creativity and science, and with a team of researchers difficult to surpass.

Kiehr has a ceramic glaze to her delivery: smooth and cool on the surface but warm and pleasingly textured underneath. Her dark vowels create a rich tone that never falters… Undercutting all of this is the wonderful vihuela-playing of Abramovich and Heringman. Beautifully recorded, their detailed execution of these complex polyphonic textures is as impressive and enjoyable as the programme they have created.