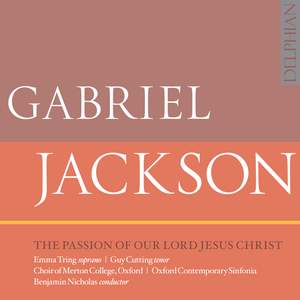 Gabriel Jackson: The Passion of Our Lord Jesus Christ

All tracks are premiere recordings

Jackson, Gabriel: The Passion of Our Lord Jesus Christ

VII. The End and the Beginning

Strikingly coloured and richly imaginative, Gabriel Jackson’s re-telling of the age-old story of Christ’s betrayal and crucifixion interweaves biblical narrative, English poetry and Latin hymns, culminating in a rare setting of poetry by T.S. Eliot – himself an alumnus of Merton College, Oxford, which commissioned the present work as part of its extensive Merton Choirbook project.

Shorter items from the Choirbook have featured on previous Delphian releases by the choir; now, The Passion of our Lord Jesus Christ is revealed as one of the project’s crowning glories.

Under the direction of longtime Jackson collaborator Benjamin Nicholas, and with soloists and instrumentalists hand-picked by the composer, it receives here a performance to match the work’s own harrowing drama and dark ecstasy.

This outstanding recording of Gabriel Jackson’s retelling of the Passion story bursts with energy... Jackson’s engaging score is richly colourful and his instrumental writing proves a particular highlight.

Soloists and choir eloquently weave through the shifting perspectives of this work of exquisite imagination with involving feeling, and the Oxford Contemporary Sinfonia take to Jackson’s often surprising but always richly executed orchestrations with aplomb. Quite unlike any Passion you’ve heard before, it is a rewarding work, deeply sincere, immediately accessible and deserving of much wider exposure.

It’s a work closely bound up with the college’s history and community, but one that gives every promise of a rich future life beyond both…A 10-piece ensemble, dominated by the glitter of harp, percussion and high woodwind, gives the work its dramatic scope, by turns taut and lean and then thickly spread, rich with melodic embroidery.

This is an unabashedly diatonic, very singable work, one which would take a hard heart not to love. Me, I was smitten three or so minutes in, tenor Samuel Costello's “Tell ye the daughter of Sion…” ringing out over sustained string chords and a chirruping soprano saxophone. The interplay between choir, tenor and instrumentalists is brilliantly handled … It's as if a zoom lens is being deployed, helped by unobtrusively spectacular engineering: this is among the best-sounding choral recordings I've heard. Purchase forthwith.