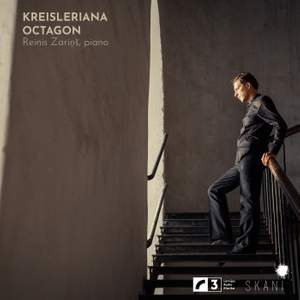 Robert Schumann’s Kreisleriana, op.16 is coupled with a world premiere recording of Octagon: Episodi e sonata, a work written by Andris Dzenitis for pianist Reinis Zarins, a 2018 Artist in Residence at the Latvian Radio 3. Andris Dzenitis will be familiar to audiences and critics due to his recent work Mara for Boston Symphony and Leipziger Gewandhaus premiered by Andris Nelsons.

Dzenitis comments on Octagon: “The cycle for piano unites contrasting impressions that I’ve gained from various experiences right here, from the colours and energies of my native land, as well as from my wanderings through Greece in a hot July and that country’s culture, natural environment and soulfulness, which inspired several parts of the cycle. The composition’s eight corners are made of seven miniatures, all of which gather around the eighth, a somewhat larger, energetic, sonata-like opus. Similarly, to the small, warm, colourful little houses, huts and squares in a medieval town - each full of all sorts of different emotions, characters and understandings of life - that are assembled around the majestic, hilltop cathedral or ruler’s castle, which is, however, not always full of the most positive emotions.”

Since his concerto debut at the age of ten, pianist Reinis Zarins has performed as a recitalist, chamber musician and concerto soloist throughout Europe and North America. Equally at home in classical and contemporary repertoire, his passion lies in the creation of programmes and interpretations that explore the deeper reasons and purposes behind the music, and to share them with his audiences. Laureate of 11 international competitions, Zarins has appeared in various music festivals, including Lucerne Festival, Bath International Music festival and Scotia Festival of Music. Zarins has collaborated with leading orchestras, like Moscow Chamber Orchestra, Kremerata Baltica, Ostrobothnian Chamber Orchestra, and conductors Pierre Boulez, Pablo Heras-Casado and Diego Masson, among others.