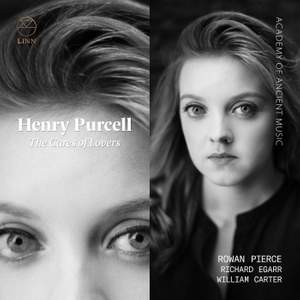 Purcell: The Cares of Lovers

Pierce’s voice is delicious: clear, strong, supple, with sparkling top notes and a warm, textured middle and low register. She’s mistress of her words, bending vowels and clipping consonants... — BBC Music Magazine, May 2019, 3 out of 5 stars (Performance) / 4 out of 5 stars (Recording) More…

Purcell: The History of Timon of Athens, The Man-Hater, Z. 632: The Cares of Lovers

Purcell: The History of King Richard the Second, Z. 581: Retir’d from Mortal’s Sight

Purcell: The Rival Sisters, or The Violence of Love, Z. 609: Celia Has a Thousand Charms

Purcell: Hears Not My Phillis "The Knotting Song", Z. 371

Purcell: Bonduca, or The British Heroine, Z. 574: O Lead Me to Some Peaceful Gloom

Purcell: Now That the Sun Hath Veiled His Light "An Evening Hymn on a Ground", Z. 193

Linn Records is thrilled to introduce soprano Rowan Pierce in what promises to be a sensational debut recording.

The Cares of Lovers comprises songs from across Purcell’s brief career from She loves and she confesses too, one of his very first published pieces (1683), to Sweeter than roses from his final months (1695).

Although they all display the same matchless ingenuity and uncanny ability to set English words to music, a highlight includes Tell me, some pitying angel - a triumph of dramatic composition and the equal of any Italian cantata of the period.

Since winning the President’s Award at the Royal College of Music in 2017, Pierce has won acclaim for her performances at The Barbican, Royal Festival Hall and at the BBC Proms.

Her performance in Purcell’s The Fairy Queen, with the Academy of Ancient Music, won praise for her “expressive” (Financial Times) and “heart-piercing” (The Independent) singing.

Pierce’s voice is delicious: clear, strong, supple, with sparkling top notes and a warm, textured middle and low register. She’s mistress of her words, bending vowels and clipping consonants to maximise rhetoric, whether desperate urgings or whispered promises…Pierce is a poised and charming artist; we wait for her musical invention to soar free.

Pierce uses a highly effective range of vocal colours, ranging from a deliberately blanched tone to a much fuller and richer sound and she successfully walks the thin line between sounding either too sophisticated or too guileless. Her diction is outstanding. Additional colour is provided by Richard Egarr on the harpsichord and William Carter on the lute and theorbo, apparently a deliberately restricted choice of accompaniment in order to maximise a restricted palette.