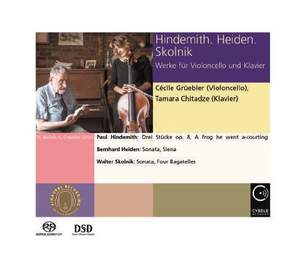 Hindemith: A frog he went a-courting

“...with irrepressible joy and energy“ – On the Trail of Paul Hindemith, Bernhard Heiden and Walter Skolnik: Produced both in Surround and in 3D Sound.

I have already been asked many times, says Cécile Grüebler, why I have still not recorded any CDs. The reason is that I do not want merely to play beautiful works, but rather tell a story and design a programme whose aim is connecting people and generations and showing a new musical path.

The Swiss cellist has now found such a programme, and the “musical path“ is im mediately clear in that the three composers featured on this SACD are linked by teacher–pupil relationships. How this project came into being is a minor miracle to Cécile Grüebler: in 2017, with her long-time duo partner, the pianist Tamara Chitadze, she happened to cross the trail of Hindemith while on an extended stay in New York: as I was walking on the streets, cello in tow, I got wrapped up in a thrilling conversation with the Manhattan-based 80-plus-year-old composer Walter Skolnik. Many hours of music-making together ensued, and I was allowed to listen in on stories from his student days.

I learned that the German-American Bernhard Heiden had studied with Hindemith and later became Walter Skol nik’s most important teacher. By the time I returned home, I had a fully-formed idea for a project in mind, which is a labour of love that also makes sense musically...

This sense is twofold: to start, the quality of the selected works and secondarily, the fact that two of the three composers are virtually unknown in Europe and their music is hardly ever heard here.