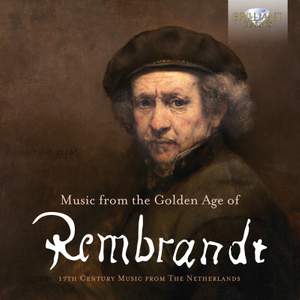 Music from the Golden Age of Rembrandt

Recorder Sonata No. 1 in F Major: I. Vivace, adagio

Songs and dances, fantasias and sonatas by native contemporaries of the master Dutch draughtsman and painter; an engrossing portrait in sound of 17th-century Dutch high culture.

Mahler based the second movement of his Seventh Symphony on The Night Watch by Rembrandt, but the painter himself depicted few musicians and no acquaintances with musicians are known. His most famous musical contemporary was the keyboardist and composer Sweelinck, whose setting of Psalm 1 is presented here in a consort-style recording alongside three keyboard works played on harpsichord and organ.

This collection also highlights much more unfamiliar names to illustrate the rich musical culture of the Low Countries at the time of the painter’s flourishing. There are vivid sacred madrigals by Herman Hollanders; stylish pavans by Cornelis Schuyt; a transcribed, extensive Salve Regina for organ by Pieter Cornet; a song for solo recorder by the lutenist Jacob van Eyck, Doen Daphne d’Over schoone Maegt; solo-vocal motets by the poet and diplomat Constantijn Huygens, who did in fact know Rembrandt; and much, much more.

All the works and composers, however unfamiliar, are elucidated in an invaluable booklet essay. The organ recordings were made in the Oude Kerk of Amsterdam which played a significant role in Rembrandt’s life (and became the resting place of his wife, Saskia), on the church’s transept organ, which has been newly restored to the meantone temperament which the composers on this album would have known and written for. Full sung texts are also included in this invaluable and unrivalled collection.