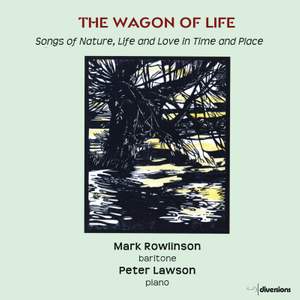 The Wagon Of Life

Songs Of Nature, Life and Love in Time and Place

Pitfield: The Wagon of Life

Pitfield: By the Dee at Night

Kimpton: Faintheart in a Railway Station

Joanna Treasure: Tango (Do You Remember?)

Joanna Treasure: I Saw the Girl

Wilkinson, S: The sunlight on the garden

Manning: My Song Shall be of Mercy and Judgement

Manning: The Lord Is King

Songs of the Cliff Top: No. 2, After the Kill

Songs of the Cliff Top: No. 3, Puffin

The long and vibrant tradition of art-song in England has seen many great composers from Finzi to Vaughan Williams, Gurney to Moeran and Warlock and countless more. The small Dunelm Records label released many albums of English song in limited circulation, several of which are now again available on Diversions. This recording was made in 2003 for the North West [England] Composers’ Association and includes songs by several of the UK’s song specialists, some of whom are far better known internationally than others. The program shows the great variety of styles produced in settings of poets from Thomas Hardy to Tennyson, Brontë and many others in these ‘Songs of Nature, Life and Love’. Mark Rowlinson has had an international singing career for over 50 years most recently appearing as narrator in Rawsthorne’s ‘Practical Cats (Divine Art DDA 25169, 2018) as well as being a senior BBC producer. Peter Lawson is widely regarded as the best accompanist in the UK and a very worthy successor to the legendary Gerald Moore.