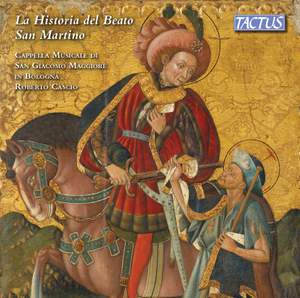 The History of Saint Martin,1558

Laude, Book 1: L'amor a me venendo

Within this recording the reading of the 'Historia del Beato San Martino', a devotional text from the beginning of the sixteenth century is brought to light for the first time on CD. The music narrates in a fresh and popular language the events of San Martino of Tours, through a colourful account of his life, which plunges us into the typical mixed atmosphere of divine and profane of the end of Humanism and beginning of the Renaissance. The reciting voice of Roberto Cascio is flanked by the instrumental ensemble of the Cappella Musicale di San Giacomo Maggiore in Bologna. The choice of music was based on the particular period of Italian music prevalent at the end of the 1400s and the beginning of the 1500s, and, in particular, on the widespread devotional-laud genre and the use of spiritual camouflaging (in fact, the melodies derived from the secular repertoire, which, in turn and very often, came from the many French composers who, at that time, frequented the most important Italian courts).