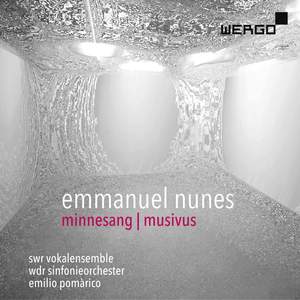 Don't expect anything simpler from me!' Emmanuel Nunes (1941-2012) was an artist of almost intimidating ability and self-confident stubbornness much like his teachers Karlheinz Stockhausen and Pierre Boulez. Apart from early works and large musical drama projects, his output consists primarily of two large-scale cycles. The first contains nine works, including Minnesang for twelve vocal soloists: a mystical and spiritual work that translates the medieval art of Minnesang into modern terms and whose musical effects are founded on the intelligibility of the texts. Nunes also composed a number of pieces not included in these cycles, among them the orchestral work Musivus, which was written for Expo 98 and premiered in a revised and expanded version in Cologne in 2001. Musivus is 'a monument of spatialization' that can make the listener dizzy with its tiny fields of musical activity that bloom into a gigantic visual and acoustical mosaic that is extremely changing to a traditional, process-oriented way of listening.