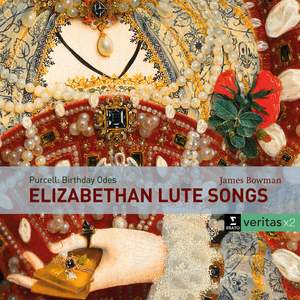 Pleasant 1970s accounts, though James Bowman’s countertenor voice has been overshadowed by recent, more flexible, rivals, and the perky but sedate speeds of the Birthday Odes now seem cautious. — BBC Music Magazine, May 2019, 3 out of 5 stars More…

VI. The Day That Such a Blessing Gave (Bass, Chorus)

VIII. These Are the Sacred Charms (Bass)

Love's Goddess Sure Was Blind This Day (Countertenor)

Those Eyes, That Form (Bass)

Long May She Reign (Soprano, Chorus)

May Her Blest Example Chase (Soprano)

Many Such Days (Countertenors)

May She to Heaven (Chorus)

As Much As We Below Shall Mourn (Soprano, Countertenor, Tenor, Bass, Chorus)

Countertenor James Bowman (b.1941) enjoyed a long association with early English song, an interest which bore fruit with this 1972 recording of Elizabethan lute songs, here making its first appearance on CD. Together with the lutenist Robert Spencer, Bowman arranged the programme to reflect the repertory of the theatre and court and the career of John Dowland, with a final homage to Italy, the cradle of early song. The recordings of Purcell’s Birthday Odes date from 1975. Between 1689 and 1694, Henry Purcell produced an annual ode for the celebration of Queen Mary’s birthday. The last and best known is Come, Ye Sons of Art, which drew on the composer’s recent successes in the theatre by employing a larger orchestra than usual (with trumpets, oboes and recorders) and giving the chorus a more prominent role.

From the late 1960s the countertenor James Bowman was at the forefront of the early music revival. He made his London debut at the Queen Elizabeth Hall in 1967 and enjoyed a decade of work with David Munrow and the Early Music Consort, later collaborating with Christopher Hogwood and the Academy of Ancient Music. In the early 1970s Bowman and the Early Music Consort made ground-breaking recordings of Medieval and Renaissance music, also pioneering historically accurate practice in music of the 17th century, notably with the album ‘Monteverdi’s Contemporaries’ (1976).

Pleasant 1970s accounts, though James Bowman’s countertenor voice has been overshadowed by recent, more flexible, rivals, and the perky but sedate speeds of the Birthday Odes now seem cautious.