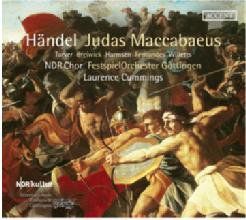 This is one of the best Judas Maccabeus performances ever…To my ear, no choir has done justice to the intricacy of Handel’s writing like the NDR Chor does. Incisive, sensitive and saturated with... — BBC Music Magazine, May 2019, 5 out of 5 stars More…

Judas Maccabäus is one of Handel’s most impressive and successful works. More than 50 performances took place in Handel’s lifetime.

The integration of the libretto with the conflict between the Scottish Jacobites under the leadership of the catholic Stuart pretender Charles Edward and the royalist government troops played a crucial role in this.

The original libretto tells the story of the struggle of the Jews against the rule of the Seleucids. Handel portrays the plot with colourful arias, touching laments and exultant triumph choruses.

The present live recording is a production of the 2018 International Handel Festival in Göttingen, highly praised by the critics and the audience. With Laurence Cummings (the Festival’s Artistic Director) a renowned Handel specialist stands at the helm of the Göttingen Festival Orchestra, assisted by an excellent vocal cast and the NDR Choir.

This is one of the best Judas Maccabeus performances ever…To my ear, no choir has done justice to the intricacy of Handel’s writing like the NDR Chor does. Incisive, sensitive and saturated with colour, the choir’s sound moves effortlessly between intentionally nasty and utterly gorgeous…Handel’s work is among his most brilliant, and Cummings does it full justice.

Where [Cummings] and his expert Gottingen forces decisively score is in their vivid response to the music’s elemental vigour…Deanna Breiwick, rather more vibrant than today’s typical Handel soprano, sings with firm, bright tone and free-soaring top notes. Sophie Harmsen fields a warm, evenly produced mezzo…Kenneth Tarver, with an ideal blend of velvet and steel in the tone, outstrips all his rivals on disc.