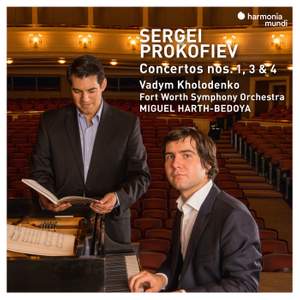 2013 Cliburn Gold Medalist Vadym Kholodenko became the first-ever "Artistic Partner" with the Fort Worth Symphony Orchestra beginning in 2014/15. He now concludes his complete cycle of Prokofiev piano concertos, which opened with Nos. 2 and 5. The three works heard here were composed over a span of two decades (1911-1930) and met with widely uneven reception, which ranged from the great popularity and critical acclaim in the case of No.3 – to incomprehension and neglect, when it came to No.4 (the 'other' concerto for the left hand alone).

Personality, thought Stravinsky, was Prokofiev’s strongest quality. Vadym Kholodenko has plenty of it…Though his playing is always lucid, never muddy, Kholodenko looks at these three works through late-Romantic eyes in the lyric passages…[Kholodenko’s] claim to distinction lies in the poetry of the many introspective moments.

In the First Concerto, the pianist tosses off the first movement’s relentless incisiveness and characterful wit…However, his arch hesitations and tenutos trivialise and undermine the acerbic character of the finale’s tarantella.