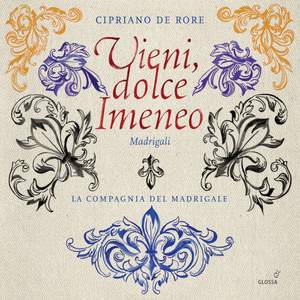 ‘Sebben il duol’ has a magical ring to it…For me this is one of the standouts, but the entire collection is perhaps the best introduction to Cipriano now available. At its best it equals anything... — Gramophone Magazine, February 2019 More…

With ‘Vieni, dolce Imeneo’, La Compagnia del Madrigale make another important stop on their compelling journey across the territory of Italian secular song with a disc devoted to one of the most significant, yet these days somewhat bypassed, composers: Cipriano de Rore.

De Rore was a Fleming who enjoyed great success notably in the Italian courts of Ferrara and Parma - but with a prestige which extended up and across Europe.

He composed in many genres but it is the secular madrigal - recorded here - where his skill was most valued, for example in creating extended and expressive melodic lines coupled with innovatory preechoes of the seconda pratica so triumphantly expressed - albeit amidst great criticism - by Claudio Monteverdi.

Glossa recordings of madrigals by Marenzio, Gesualdo and Monteverdi have already demonstrated musical pleasures, such as an uncommon vocal blend and delicacy and a meticulous dynamic control exhibited by the richly-experienced members of La Compagnia del Madrigale. Those delights are also to be experienced with these 19 madrigals by Cipriano de Rore, composed late in his career.

With texts by Petrarch, Ariosto and assorted court poets for these madrigals, essay writer Marco Bizzarini highlights one of the principal characteristic features of de Rore’s mastery when he points to the disc’s title track, ‘Vieni, dolce Imeneo’: the ideal union between poetry and music.

‘Sebben il duol’ has a magical ring to it…For me this is one of the standouts, but the entire collection is perhaps the best introduction to Cipriano now available. At its best it equals anything that has been done is this repertory by the other ensembles in which these hugely experienced singers have sung.