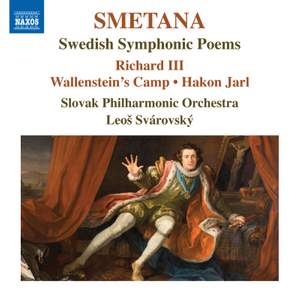 The symphonic poems Smetana wrote during his stay in Sweden were composed during a pivotal time in his life. Financial prospects at first seemed better in Gothenburg than in his native country, while the dual influences of Berlioz and Liszt were informing the direction of his music. Richard III is not a programmatic drama, but focuses instead on the haunting scene before the Battle of Bosworth in Shakespeares play. Wallensteins Camp is symphonically structured, while Hakon Jarl dramatises the life of the tyrannical Viking warrior with memorable flair.