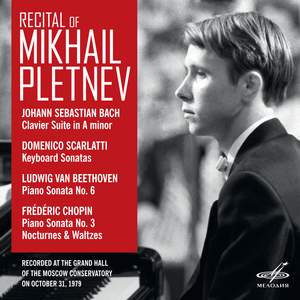 If the audience hadn’t already registered what a special artist they had before them, they must surely have done so with the four Scarlatti sonatas… there is some hair-raisingly imaginative pedalling,... — Gramophone Magazine, May 2019 More…

Melodiya presents a unique find from its sound archive – a broadcast recording of Mikhail Pletnev’s recital at the Grand Hall of the Moscow Conservatory on 31 October 1979. This recording has never been previously released on record or CD. For almost forty years, from his triumphant victory at the VI International Tchaikovsky Competition, the name of Mikhail Pletnev has never been forgotten. Pletnev is known today as an outstanding conductor, a creator of one of the best domestic orchestras and a talented composer. Today, looking back from a distance of many years, the musician’s 'early' recordings appear to be even more interesting. The recent student of Yakov Flier (Pletnev was the great teacher’s last pupil, his 'swan song') who continued his education at the graduate school with Professor Lev Vlasenko), the 22-year-old Mikhail Pletnev demonstrates his impeccable style and professional skills. The programme includes works by J.S. Bach, Scarlatti, Beethoven and Chopin.

If the audience hadn’t already registered what a special artist they had before them, they must surely have done so with the four Scarlatti sonatas… there is some hair-raisingly imaginative pedalling, some precision-tooled ornamentation and in places some delectable humour in the sudden application of brakes… An authentic document of a young artist exalting in his powers before one of the world’s most discerning and demanding audiences.

The Waltz in F Major in particular is a delight and deservedly greeted with rapturous applause from the audience.