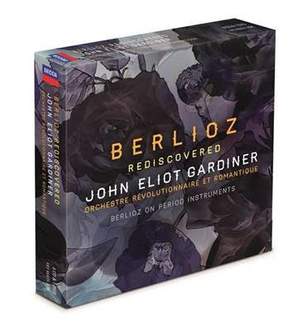 Gardiner is a former Davis disciple whose own period-instrument recordings are often revelatory, at their best rendering crystal-clear the lurid colours and brilliant imagination of Berlioz’s... — BBC Music Magazine, April 2019 More…

The Orchestre Revolutionnaire et Romantique under the leadership of John Eliot Gardiner exemplifies the highest level of quality of period instrument performance practice to this day. John Eliot and his orchestra remain the leading internationally recognised interpreters of Berlioz’ works with their performances vividly presenting the composer’s delight in complex rhythmic interplay, and their period instruments revealing a much wider range of sonorities, creating a sense of freshness and discovery. Brought together for the first time for the 150th anniversary of the Berlioz’ death, Decca presents this 8CD+1DVD original jacket set of the ground-breaking Philips recordings. Includes the world premiere recording and Grammy® Award-winning Messe solenelle alongside the key orchestral works Symphonie Fantastique, Harold in Italy and the “dramatic symphony” Roméo et Juliette and the “dramatic legend” La Damnation de Faust. The set is accompanied by performances on DVD of Symphonie Fantastique (from the same hall in which it was premiered in 1830) and the Messe solennelle from Westminster Cathedral 1992 (the first performance of this large-scale Mass for 150 years).

. . . [an] outstanding "period instrument" version. The word that comes to mind repeatedly during the driven but crisply articulate first two movements is "dashing". Gardiner is excellent at long crescendos: well controlled build-ups, then the emotion boiling over at the climax. It isn't just in the big outpourings of feeling that he scores: at the beginning of the central lonely pastorale, the flavoursome 19th-century French oboe and cor anglais are two voices calling to each other across wide spaces, in the background a sense of growing unease. Discomfort and deliciously grotesque orchestral colouring grow splendidly during the "March to the Scaffold". The finale is a sinister spine-tingler . . . BBC MUSIC MAGAZINE on Symphonie fantastique

“Gardiner’s Symphonie fantastique is of endless fascination and enjoyment ... he brings out the daring originality of Berlioz's visionary inspiration and draws hugely spirited, yet refined playing from his period- instrument band. Exemplary sound and balance, too.” GRAMOPHONE

Gardiner is a former Davis disciple whose own period-instrument recordings are often revelatory, at their best rendering crystal-clear the lurid colours and brilliant imagination of Berlioz’s orchestration.