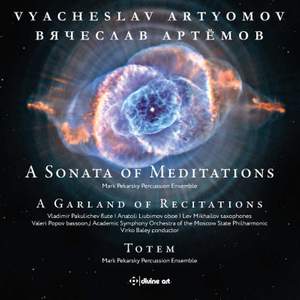 Vyacheslav Artyomov: A Sonata of Meditations; A Garland of Recitations; Totem

Artyomov: A Sonata of Meditations

A Garland of Recitations

Vyacheslav Artyomov is considered by many to be Russia’s greatest living composer. Since the fall of the Soviet regime his music has travelled the world to great acclaim. It is deep, ultimately spiritual and brilliantly crafted, with influences from the Russian symphonic tradition colored by Mahler, Scriabin, Honegger and Messiaen to name a few – but melded into a unique voice. The Divine Art Artyomov Retrospective is a mix of new recordings and former Melodiya releases. It continues with the 7th album containing two works for percussion ensemble and one orchestral – all typifying Artymov’s true genius as a truly individual composer who can make thoroughly modern music listenable and demanding further regular hearings. Mark Pekarsky leads the first percussion ensemble established in Russia and still the foremost group in that country. Russian-American conductor Virko Baley directs the superb Moscow Philharmonic.