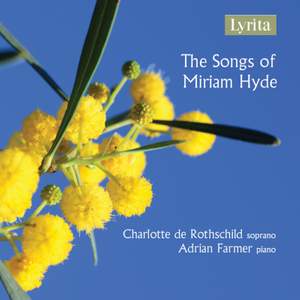 The Songs of Miriam Hyde

Hyde, M B: My Sorrow Stirs

Hyde, M B: The Apple Tree

Hyde, M B: Rhyme After Rain

Hyde, M B: The Cedar Tree

Hyde, M B: Fire in My Heart

Hyde, M B: Take thou this rose

Hyde, M B: At beauty's altar

Hyde, M B: In the Rose Garden

Hyde, M B: The Constant Pool

Hyde, M B: Leaves in the Wind

Hyde, M B: Thoughts at Dusk

Hyde, M B: Nightfall by the River

Hyde, M B: A Song of Autumn

Hyde, M B: When Our Wattle-Tree Blooms

Hyde, M B: The River and the Hill

Miriam Beatrice Hyde was born in Adelaide on 15 January, 1913 into a prodigious musical and artistic family that helped shape her own musical tastes. A child prodigy, Hyde's musical education began at an early age with her mother as her first teacher. After gaining the Bachelor of Music at the Elder Conservatorium of Music, University of Adelaide, she won the Elder Overseas Scholarship in 1931 for study at the Royal College of Music, London from 1932-35. Undoubtedly, Miriam Hyde is best known for her piano works for students ranging from beginner to advanced, such as Valley of Rocks, but what of her songs? Often overlooked these charming, often inspirational and personal works evoke Hyde's love of nature, of the landscape, of emotions, of life itself.