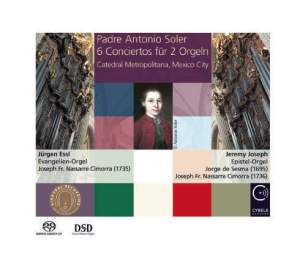 in the Metropolitan Cathedral, Mexico City

The instruments are sophisticated, subtle and hugely colourful, with antiphonal and echo effects made possible not just by their spatial separation, but by the small echo (swell) devices and... — Choir & Organ, March 2019, More…

Soler, A: Concertos (6) for two organs

After having held posts at Montserrat and Lérida, in 1752, Padre Antonio Soler (1729–1783) entered the Spanish court in El Escorial (the palatial monastery of the Hieronymite Order near Madrid), completed his vows in 1753 and became Kapellmeister and organist in 1757. Here he met, among others, the famous harpsichordist and composer Domenico Scarlatti (1685–1757) who composed over five hundred and fifty harpsichord sonatas. Soler also added no fewer than one hundred and forty-four to the sonata genre – usually in one movement. The relationship between the two is evident in Soler's style, e.g. the re-emergence of musical elements, structures sub-divided with repetitions and the use of Spanish folk music (which can be heard here and there in the 6 Conciertos for 2 Organs, R463 [145], composed in 1770).

Form and content suggest that it is not music for a church with two oppositely placed organs, but rather for courtly entertainment performed in a hall at the El Escorial monastery.

On the present SACD recording, we have chosen two historical instruments which are immensely colourful and offer enough tonal possibilities to distinguish the two parts in any desired situation. In addition, both organs represent the sound aesthetic and richness in colour of Spanish music of the mid-18th century. The presence of echo manuals and external Nave facades has also added a new dimension to performing echoes, responses and continuo playing. The splendour of the reeds allows the works to emerge out of the niche of their chamber music character. The two historical organs of the Catedral Metropolitana, Mexico City, have reopened and revitalised the cosmos of the score.

Yet grander and even more beautiful and powerful: this is the first impression of the two organs, and certainly of those who commissioned the instruments, displaying their tremendous wealth and overwhelming power. And yet the organ builder, Joseph Francisco Nassarre Cimorra (1701–1737) succeeded in fitting the two instruments harmoniously within the choir; the sheer size of the room even makes them appear filigree.

It is also very exciting for the listener, as the musical dialogue of the organists, captured very realistically both in 5.1ch Surround Sound and in 3D binaural stereo recording techniques, unfolds and flourishes in the magnificent space of the Catedral Metropolitana. The twin organs of 1735/36 as historical instruments, yield a rather special potential, so much so that sometimes the players themselves are surprised by the results...

The instruments are sophisticated, subtle and hugely colourful, with antiphonal and echo effects made possible not just by their spatial separation, but by the small echo (swell) devices and the stops in the rear façades sending sound backwards into the aisles running parallel to the chancel.Essl and Joseph’s creativity and brilliant ensemble playing, together with the sixth-comma meantone tuning (and the organs are perfectly in tune!) make this a joy to listen to. Who, ultimately, could resist those chamades blazing their way through the ‘Emperor’s Fanfare’?