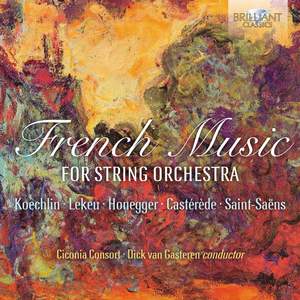 Honegger: Symphony No. 2 in D for strings and trumpet

The first modern recording of a gripping 20th-century masterpiece for strings.

The name of Jacques Castérède (1926-2014) may not be well known outside his native France, but the taut and compelling Symphony for strings which he wrote at the age of 26 – his first major work – deserves far wider recognition. Tension runs high throughout the opening Modéré before breaking into a violent Scherzo in the manner of Bartók’s Music for Strings, Percussion and Celesta. Shostakovich and indeed the Second Symphony of Arthur Honegger may be called to mind by the impassioned lyricism of the slow movement, which rises from darkness before discovering a point of radiant transfiguration in the movement’s coda. Restless counterpoint brings the finale to an exhilarating, emphatic conclusion.

The first recording of Castérède’s symphony won a Grand prix du disque, but it has taken half a century for the second to be made by this young and exciting Dutch string ensemble as the centrepiece of their debut on CD. Turbulent energy and sombre elegy are the key signatures of the imaginative programme: Honegger’s Second Symphony of 1937 explores the same expressive territory as Castérède’s Symphony, though its trumpet-led apotheosis achieves hard-won resolution.

Reflective miniatures by Koechlin, Honegger and Saint-Saëns are highly coloured by their composer’s individual voices, and there is space for the heartfelt Adagio of Guillaume Lekeu, which belongs in the company of Mahler’s Adagietto and Barber’s ubiquitous Adagio.

This recording marks the CD debut of the Ciconia Consort, a Dutch string orchestra conducted by Dick van Gasteren, an internationally active conductor, who was Bernard Haitink’s assistant during the Mahler Festival Amsterdam in 1995.