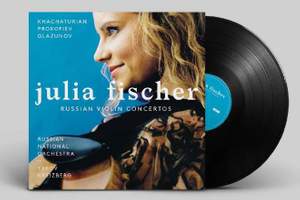 This remarkable album marks the recording debut of German violinist Julia Fischer as well as the beginning of her extraordinary partnership with Russian-born conductor Yakov Kreizberg, which would result in numerous PENTATONE releases before the conductor’s untimely death in 2011. Together they tackle three Russian violin concertos which have been tragically overlooked, shedding new light on these masterpieces.

The maturity of the repertoire selection and delightful interplay between soloist, conductor and orchestra all contribute to a truly stunning debut album. The violin concertos of Khachaturian, Prokofiev and Glazunov are preserved in timeless beauty, providing a testament to the masterful artistry of Yakov Kreizberg, the Russian National Orchestra and a very precocious Julia Fischer. The multiple prize-winning album is released here for the first time in a highly collectible LP version.