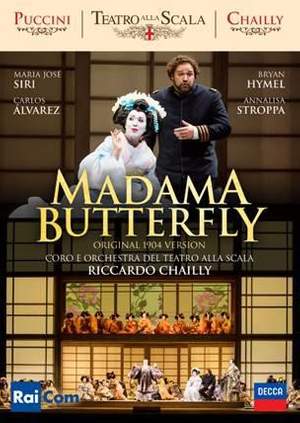 There are undoubtedly passages of juvenile stylistic autopilot here that Puccini was right to cut…But it’s genuinely fascinating to hear what the first-night audience would have heard…The superb... — BBC Music Magazine, April 2019, 4 out of 5 stars More…

This is the first-ever video release of the original two-act version of Madama Butterfly from 1904, making this a truly unique release

Drawing inspiration from Japanese Kabuki theatre this magical new production features an international star cast “This was a performance endowed with abundant detail, an impressive depth of sound and a suppleness in lyrical passages that was nowhere more luxuriant than in the glittering evocation of a Nagasaki dawn.” Financial Times

There are undoubtedly passages of juvenile stylistic autopilot here that Puccini was right to cut…But it’s genuinely fascinating to hear what the first-night audience would have heard…The superb musical and dramatic performances make this DVD well worth seeking out. María José Siri…is a revelation as Butterfly, blessed both with power and a particular purity in the upper range…[Hymel] gives an ardent, apparently effortless vocal performance. This Butterfly-with-a-twist is up with the best of them in terms of emotional impact.

The premiere of Madama Butterfly at La Scala, Milan, in 1904 was famously one of operatic history’s great flops...It’s hard to imagine, though, that the orchestral playing or conductingthat night came close to what Chailly achieves here with his Milan band, beautifully paced and tender, with the sheer invention and quality of the music shining reliably through. It’s carefully controlled, too, so that we never risk toppling over into excess. He’s assembled a fine cast, too.

Possessing a substantial voice with bright, forward tone, María José Siri proves skilful in moving around the notes while deploying the appropriate weight for any given moment…The orchestra and chorus confirm their reputation, while Chailly’s conducting results in a detailed account of the score that never sacrifices the bigger picture.