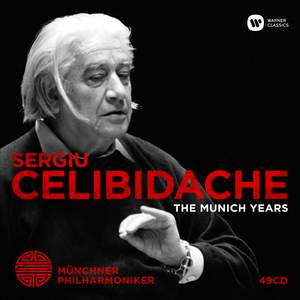 Performances that are unique in their spaciousness, care over detail and an almost hypnotic control of musical line. — Gramophone Magazine, February 2019

Sergiu Celibidache’s relationship with the Münchner Philharmoniker lasted from 1979 until the Romanian-born conductor’s death in 1996. Believing in unusually lengthy, detailed rehearsals and in achieving a state of transcendence in the concert hall, Celibidache moulded the Bavarian orchestra into an ensemble to rival the Berliner Philharmoniker, which he had conducted more than 400 times in the years following World War II. This 49-CD set, which reflects (though not exclusively) Celibidache’s particular dedication to Austro-German repertoire, includes seven of Bruckner’s symphonies in interpretations of characteristic expansiveness and spirituality.

Performances that are unique in their spaciousness, care over detail and an almost hypnotic control of musical line.