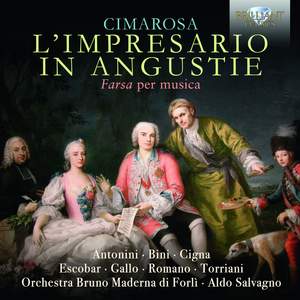 In all, this is an enjoyable, interesting recording of L’impresario in angustie, with good, clear sound and effective, solid performances all round. If you are a Cimarosa fan or a collector of... — MusicWeb International, February 2019 More…

Act I Scene 10: Orsu per me le cose vanno da male in peggio (Crisobolo, All)

The Neapolitan Domenico Cimarosa (1749-1801) was certainly a prolific composer of operas, having more than 80 titles to his name. Though many have only recently enjoyed a revival, they were widely admired in his day. Cimarosa specialised in comedies, the form known as opera buffa, and his greatest achievement, Il matrimonio segreto, represents the pinnacle of the genre and would influence his contemporaries and generations of composers to come.

L’impresario in angustie (‘The Ruined Impresario’), a one-act farce from earlier in his career, was also a resounding success, even capturing the imagination of that German literary giant Johann Wolfgang von Goethe when he saw it in Rome. Goethe would go on to join the many translators of the work who facilitated the opera’s staging across Europe and its remarkable international popularity.

An impresario and his cast and creative team are preparing a new opera for their theatre in Naples. The three leading ladies are each attempting to intervene with the impresario, the composer, and the poet in charge of the libretto, in order to secure for themselves the biggest role and best music in the new production. Each of divas, in turn, is the object of amorous attention from one of more of the creators. The impresario is bankrupt, however, and the work will never see the light of day.

The cast for this recording is a who’s who of Italian bel canto and opera buffa talent, all skilled singer-actors capable of bringing the comic nuance of this hilarious story into vivid relief.

Recorded in April 2017 in Milan

In all, this is an enjoyable, interesting recording of L’impresario in angustie, with good, clear sound and effective, solid performances all round. If you are a Cimarosa fan or a collector of opera from the 18th Century, this is possibly a CD that you should purchase and add to your assortment.....”