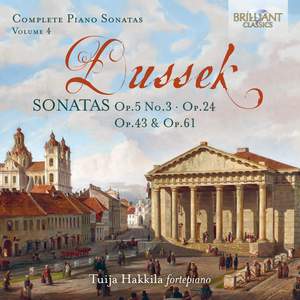 Jan Ladislav Dussek (1760-1812) was a composer-virtuoso esteemed by Haydn, from the same generation as Beethoven but far more travelled, feted in salons and palaces from London to St Petersburg.

The four sonatas on this disc all come from different periods: the earliest (op.5 no.3 in A flat) dates back to 1788, the threshold of the French Revolution, while the last (op.61 in F sharp minor) was composed in 1807, in the midst of the turmoil of the Napoleonic Wars. The B flat major Sonata op.24 reflects Dussek's time in London, and op.43 in A major the period of his hasty departure from London, abandoning his young wife in London and fleeing to Hamburg to avoid his creditors, notably including Lorenzo da Ponte.

In the sonatas from op.24 onwards Dussek richly exploits the colourful sonorities of the then-new five-and-a-half-octave Broadwood grand, mingling flamboyant virtuosity and explosive rhetoric with a rhapsodic expansiveness and harmonic side-slips that foreshadow Schubert. The music is tautly structured and passionately argued, with richly imaginative textures and a subtle use of chromaticism for poignant effect.

On this latest instalment in a projected complete set of the sonatas, each album performed by a different pianist specialising in music of the Classical era, the Finnish pianist Tuija Hakkila plays two instruments: a Viennese five-octave instrument of anonymous manufacture dating from around 1800, and a modern copy of a Longman Clementi fortepiano (London, 1799) made by Chris Maene. Both pianos are ideally suited to the drama, virtuoso brilliance and often deep, rich sonorities of these sonatas.