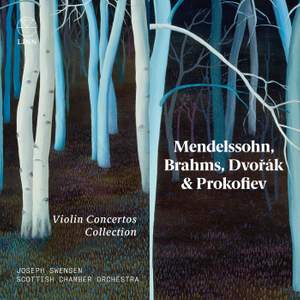 There’s an impressive level of excellence throughout, though Swensen is adaptable to moods between and within concertos…I love his natural way with slow movements, especially Mendelssohn’s and... — BBC Music Magazine, February 2019, 5 out of 5 stars More…

Mendelssohn: Symphony No. 3 in A Minor, Op. 56 "Scottish Symphony"

XI. No. 7 in A Major (Arr. for Orchestra by Schmeling)

XIII. No. 17 in F Sharp Minor (Arr. for Orchestra by Dvořák)

Encompassing his first collaboration to his last, this 4-CD collection celebrates Joseph Swensen’s tenure as Principal Conductor of the Scottish Chamber Orchestra (1996-2005). Swensen combines his role as conductor and soloist in acclaimed recordings of popular concertos by Mendelssohn, Brahms, Dvořák and Prokofiev.

Written within a hundred years of each other these concertos not only provide Swensen with the opportunity to display his mastery of formidable technical demands, but also demonstrate each composer’s individual expressive and melodic expertise. Swensen’s dual role as both conductor and soloist creates a special collaboration with the musicians of the Scottish Chamber Orchestra, who remain acutely attuned to his intentions.

In addition they perform a wonderful selection of orchestral music together to complement the concertos: Brahms’s Hungarian Dances, Dvořák’s Nocturne for string orchestra and Czech Suite, Mendelssohn’s Fingal’s Cave and ‘Scottish’ Symphony, plus Prokofiev’s Symphony no.1 and his Five Melodies (orchestrated by Swensen for solo violin and orchestra).

Joseph Swensen is Artistic Director of the NFM Leopoldinum Orchestra (Wrocław), Conductor Emeritus of the Scottish Chamber Orchestra, Principal Guest Conductor of the Orquesta Ciudad de Granada and Artistic Partner of the Northwest Sinfonietta (USA). During his tenure with the SCO, Swensen and the orchestra toured extensively in the US, UK, Europe and the Far East, performing at New York’s Mostly Mozart Festival, Tanglewood and Ravinia Festivals, the BBC Proms, the Barbican and the Amsterdam Concertgebouw.

There’s an impressive level of excellence throughout, though Swensen is adaptable to moods between and within concertos…I love his natural way with slow movements, especially Mendelssohn’s and Brahms’s – faster speeds than usual, no excess sentiment but plenty of love. The tone is always sweet, the intonation what players call ‘speaking’, which means a constant alertness that is especially refreshing in the familiar.