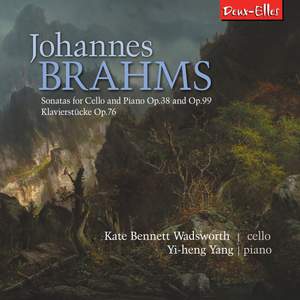 The [piano] sound is small scale with a silvery top and without the turbo-charged quality of a modern piano’s bass. This is particularly beneficial in the earlier E minor Sonata. Some may well... — BBC Music Magazine, February 2019, (Performance) / (Recording) More…

I. Capriccio in F-Sharp Minor

II. Capriccio in B Minor

A fresh take on Brahms’s sonatas for cello and piano, inspired by the playing style of Brahms and his closest colleagues.

Brahms’s sonatas for cello and piano are among the most beloved in the repertoire. Over the last century and a half, they have developed an august performing tradition, and in the process have lost some of the freshness and vitality that they had when they were new. This debut recording restores that freshness, guided by a rich historical record surrounding the Brahms circle’s playing style.

To learn more about their approach, visit The Brahms Lab on Facebook: https://www.facebook.com/brahmslab/

Kate Bennett Wadsworth is a cellist devoted to historical performance of all periods, with a special research interest in 19th-century performing practice. In collaboration with Clive Brown and Neal Peres da Costa, she has prepared annotated editions of the Brahms Cello Sonatas and co-authored Performance Practices in Johannes Brahms’ Chamber Music, published by Bärenreiter in 2015. She has appeared at festivals across Europe and North America with ensembles such as B’Rock, Tafelmusik, Arion, and the Theatre of Early Music, and given lecture-recitals and masterclasses at the Royal Birmingham Conservatoire, the Boston Conservatory, the Longy School of Music, and the Utrecht Early Music Festival.

Pianist Yi-heng Yang has appeared as soloist at The Boston Early Music Festival, The Finchcocks Collection, The Cobbe Collection, The Metropolitan Museum of Art, and Avery Fisher Hall. Recordings include the music of Mendelssohn with violinist Abby Karr on period instruments for the Olde Focus label, and 18th-century fortepiano and harpsichord duos with Rebecca Cypess on the Acis label. Yi-heng is on the piano faculty at The Juilliard School Evening Division and Pre-College, and teaches fortepiano and Piano Literature at the Mannes School of Music.

“[A]n extraordinarily impressive combination of consummate musicianship and historical research. Never before have I heard these works so persuasively played.” – Prof. Clive Brown, author of Classical and Romantic Performing Practice 1750-1900

The [piano] sound is small scale with a silvery top and without the turbo-charged quality of a modern piano’s bass. This is particularly beneficial in the earlier E minor Sonata. Some may well have problems with the almost vocal quality of the solo cello playing. That said, the approach to phrasing and rubato is often illuminating, and overall the standard of playing is never less than expert.