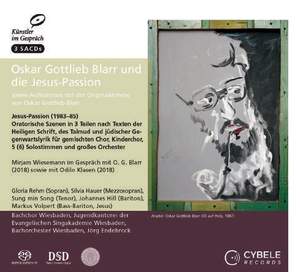 Edition Artists in Conversation Vol.10: When I don’t believe, the organ as God’s voice is a fantasy (Oskar Gottlieb Blarr). In conversation with Mirjam Wiesemann (SACD2/3), the composer answered all questions with the corresponding degree of personal reflections, associations and memories that breathe life into the whole. The organist and composer Odilo Klasen (SACD3), aptly states in his 500-plus-page dissertation on O.G. Blarr:

"Blarr realized very early on that the reception and understanding of advanced contemporary music needs something beyond the abstract, a picture, a story, even an anecdote, a hint of inspiration, in short an element beyond the absolutely musical, beyond analysis, something of pure musical craftsmanship and substance."

The secret to the success of the Jesus Passion (SACD1/2) – a live recording from the Lutherkirche Wiesbaden (30.3.2018) –, per Klasen, lies in one of the peculiarities of Blarr’s style, the fact that it is "immediately comprehensible", "even for those who know nothing at all of the complex processes involved". To this end, the enthusiastic response from audiences and critics alike to the 26 performances of the oratorio between the première in 1985 and 2018 speaks for itself.

Beginning with stories about his childhood in East Prussia, the escape in 1945 and the subsequent stages of his life until 1961, when he settled in Düsseldorf, where he lives to this day, one can follow intently as the seeds of many far-reaching impressions from early in the life of Oskar Gottlieb Blarr develop and unfold, leaving indelible marks on him: the black wide-brimmed hat of his grandfather, a symbol of the free, self-determined man that would become Blarr's visual trademark; the grand fire and rhythmic noises in his father's smithy, which led him to study percussion; and, most essentially, the organ of Bartenstein (present-day Bartoszyce in Poland). He stated: "I would certainly never have become an organist had I not played this organ in the first years of my childhood (1938–1945)...!"

In his Jesus Passion, Blarr aims to tell a story without anti-Semitism. In his conversation with Mirjam Wiesemann he distanced himself very clearly from the St. John and the St. Matthew Passions by J.S. Bach. Especially in our era of general xenophobia and with a hatred of Jews again reaching new and frightening proportions, this essential aspect sets the tone.