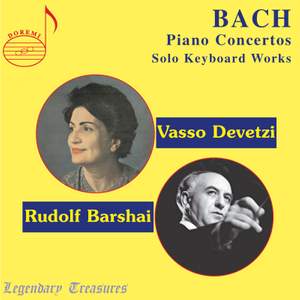 Early 1970s recordings that may lack authenticity, yet Vasso Devetzi’s velvet touch and flawless cantabile (with the Moscow Chamber orchestra) are a constant source of wonder. — BBC Music Magazine, February 2019,

Keyboard Concerto in A Major, BWV 1055: I. Allegro moderato

Vasso Devetzi (1927-1987) was born in Thessaloniki, Greece. She first performed in public at age seven. Her international career began in Paris when she played the Schumann Piano Concerto under Albert Wolff. Subsequently, she performed throughout the world with leading orchestras, from Athens to Brussels, Rio to Helsinki, and Stockholm to Zagreb. Devetzi was a close friend of Mikis Theodorakis and Maria Callas. She lived for long periods in the 1960s and 70s in the former Soviet Union, where she often collaborated in concerts with Rudolf Barshai, David Oistrakh, Mstislav Rostropovich and Galina Vishnevskaya. Born in the former Soviet Union, Rudolf Barshai (1924-2010) was a renowned violist and conductor. As a violist, he appeared with Sviatoslav Richter and David Oistrakh and was in a trio with Mstislav Rostropovich and Leonid Kogan. His conducting career began with his founding of the Moscow Chamber Orchestra. Under Barshai, they became world famous and have made numerous recordings. After his emigration to Israel in 1977, he directed the Israel Chamber Orchestra. Subsequent conducting posts included the Vancouver Symphony, the National Orchestra of France and the Bournemouth Symphony. In addition, he was a permanent guest conductor with many orchestras throughout the world. The present album features this duo performing the works of JS Bach.

Early 1970s recordings that may lack authenticity, yet Vasso Devetzi’s velvet touch and flawless cantabile (with the Moscow Chamber orchestra) are a constant source of wonder.