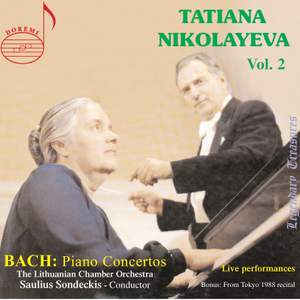 Tatiana Nikolayeva was one of the most illustrious and respected pianists of the 20th century. Born in Bezhitz, Russia in 1924, she began to play the piano at age three. She soon became a student of Alexander Goldenweiser (1875–1961), the leading piano pedagogue in Russia. From 1947 she toured extensively in the USSR. Her recognition outside of the USSR was boosted as she became the 1st prize winner of the 1950 Leipzig Bach competition. There she met Shostakovich who served on the Jury. They became friends and associates. Shostakovich considered her the ideal interpreter of his piano works and wrote for her the 24 Preludes & Fugues, Op. 87 which she premiered in 1952. Nikolayeva frequently toured Europe, America, and Japan. She had an unusually large repertory including most of the keyboard works of Bach and Beethoven. She was also a highly esteemed composer with several symphonies, chamber music and a piano concerto to her credit. In 1959 she began teaching at the Moscow conservatory, becoming a professor in 1965. She suffered a cerebral hemorrhage at a concert she gave in San Francisco on November 13, 1993. Tatiana Nikolayeva, the great pianist, composer and teacher died on November 22, 1993. This album features Tatiana performing the Bach Piano Concertos, works for which she was widely known.

Superb Bach playing from a master.