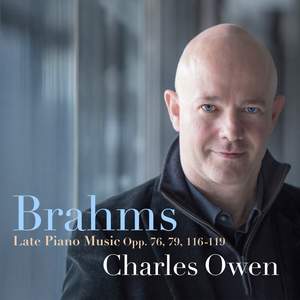 This is altogether very impressive playing, capturing all the intimacy of the pieces which Brahms labelled as Intermezzos, as well as the drama and urgency of the more outward-going Capriccios…What... — BBC Music Magazine, February 2019, 5 out of 5 stars More…

No. 2. Capriccio in B Minor - Allegretto non troppo

No. 6. Intermezzo in A Major - Andante con moto. Sanft bewegt

No. 7. Intermezzo in A Minor - Moderato semplice

No. 2. Intermezzo in A Minor - Andante

No. 4. Intermezzo in E Major - Adagio

No. 1 in E-Flat Major - Andante moderato

No. 2. Intermezzo in A Major - Andante temeramente

No. 1. Intermezzo in B Minor - Adagio

On his latest release for AVIE Records, Charles Owen traverses the late piano works by Johannes Brahms, in which he finds myriad moods and the composer both nostalgic and forward looking.

Steinway ambassador, Guildhall professor and co-founder of the London Piano Festival, Charles Owen turns to the late piano works by Johannes Brahms for his latest AVIE release. Within this collection of Capriccios, Rhapsodies and Intermezzi, Charles reveals myriad moods with the composer harking back as well as facing forward – from evocations of Schubert, Schumann and Liszt in the Eight Klavierstücke, Op. 76; winter-like darkness in the two Op. 79 Rhapsodies; Hungarian foot-stomping dance forms in the seven Fantasies that comprise Op. 116; nostalgic contemplation in the Op. 117 Intermezzi; romantic inflections in the Op. 118 Klavierstücke which were dedicated to Clara Schumann; and the tonally forward Klavierstücke, Op. 119.

"This beautifully produced 2CD set of the later piano works of Brahms confirms Charles Owen as a leading interpreter in this repertoire … a splendid survey of the late piano music." Musicweb International

"A class above the rest ... His performances are underpinned by an unwavering musicality that is enhanced by close attention to the score" – International Piano

This is altogether very impressive playing, capturing all the intimacy of the pieces which Brahms labelled as Intermezzos, as well as the drama and urgency of the more outward-going Capriccios…What stays in the memory after listening to Owens is the imagination and warmth of his playing, perfectly captured by the recording engineers.

The highlights of Op. 118 are to be found in the second piece, which he turns into a true Lied…The two Rhapsodies are another highlight of this set…Owen conveying the requisite sense of power, surmounting their difficulties with ease and making the much-played G minor very much his own.

Fully supported by Avie’s splendid recording, Brahms’ piano music glows. Owen performs miracles of textural lucidity, his tempos perfectly judged; but his highest achievement is to make the listener forget there is a middleman. It is almost as if Brahms speaks directly to us.
The fascinating booklet notes are built around an interview with Owen. Competition is, of course, huge, with the likes of Angelich, Perahia and Gilels, but Owen has much to say, and does so in fabulous sound.