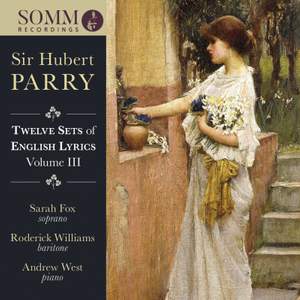 These perceptive performances by both singers and their pianist recover even the sense and sensibility of those songs which seem distant from our time…Hearing this brings us closer to understanding... — BBC Music Magazine, January 2019, 5 out of 5 stars (Performance) / 4 out of 5 stars (Recording) More…

No. 3, A Moment of Farewell

No. 7, The Sound of Hidden Music

No. 5, Through the Ivory Gate

No. 2, Nightfall in Winter

No. 1, When the Dew Is Falling

No. 1, Thine Eyes Still Shined for Me

No. 2, When Lovers Meet Again

No. 5, The Faithful Lover

No. 1, One Golden Thread

No. 8, She Is My Love Beyond All Thought

No. 3, The Spirit of the Spring

No. 4, The Child and the Twilight

Volume III features pianist Andrew West and baritone Roderick Williams (both heard on Volumes I and II) and the return of soprano Sarah Fox (who appeared on Volume II).

Composed between 1874 and shortly before Parry’s death in 1918, the English Lyrics come from a time of immense change as old certainties gave way to new complexity and a global war that would utterly change Britain’s standing in the world. Parry’s riposte was the English Lyrics: a defiant assertion that English poetry was the equal of Germany’s Lied and French mélodies and arguably created the template for the development of the emerging English art-song.

These perceptive performances by both singers and their pianist recover even the sense and sensibility of those songs which seem distant from our time…Hearing this brings us closer to understanding the essential decency of the man beloved by his pupils, including Holst and Vaughan Williams, and whose influence extended well beyond the mere issue of musical style.

Gems abound on this third and final volume in what has been a most enterprising survey, and I’m happy to report that, as on previous instalments, Sarah Fox and Roderick Williams are at the top of their game throughout…A joy from start to finish.

Throughout this album both singers are on top form, showing great care for the words as well as for the music. Andrew West plays the piano parts, as he has done throughout the series, with flair and imagination.