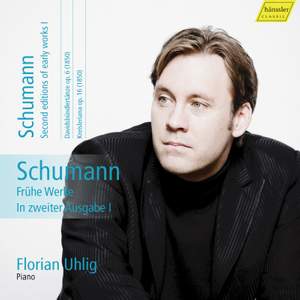 Several attempts have been made over the last sixty years or so to record all Robert Schumann’s works for solo piano, a fascinating cosmos full of variety that ranges from extremely virtuosic pieces for the concert hall to valuable literature for piano tuition. This attractive but difficult quest has unfortunately been marked by a lack of the necessary care, not to mention purely artistic deficiencies, so that none of the releases deserves the name “complete recording”. Florian Uhlig’s 15-CD set is the first genuine complete recording of Robert Schumann’s works for solo piano. Several of those CDs include first recordings. The introductory notes written by Joachim Draheim, who has discovered and/or edited a number of the works, throw light on the biographical and historical backgrounds of the respective groups of works.