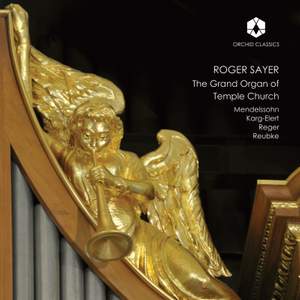 Sayer’s is a clearly envisioned reading whose alert articulation helps to referee any detail-obscuring rivalry between the Harrison & Harrison instrument at full tilt and the vibrant acoustic.... — BBC Music Magazine, February 2019, 4 out of 5 stars More…

Roger Sayer is at the forefront of British c horal and organ music, recognised both as a prize-winning organist, and as an acclaimed Choral Director with some of the UK ’s finest choirs. Sayer has even performed as the organ soloist in Hans Zi mmer’s Oscar-nominated score for the film Interstellar. Mozart called the org an the “King of Instruments”, and this re lease certainly showcases its majestic qualities. Mendelssohn’s Organ Sonat a No.1 was inspired by Bach, and exudes an air of gravitas and profundity whilst enjoying the organ’s variety of sonorities. Bach also influenced 20th-century composers Sigfrid Karg-Elert and Max Reger, both of whom followed in Bach’s footsteps by moving to Leipzig. Karg-Elert’s Symphonic Chorale is based on Jesu meine Freude by Johann Cruger, and on the notes BACH (B flat, A, C and B natural), while Reger’s chorale-based Fantasia is a work of great virtuosity. The collection ends with a memorable sonata by Liszt-pupil Julius Reubke.

Sayer’s is a clearly envisioned reading whose alert articulation helps to referee any detail-obscuring rivalry between the Harrison & Harrison instrument at full tilt and the vibrant acoustic. Incisive gestures and broad sweep characterise his approach to the Karg-Elert…But it’s the Reubke that most completely holds the ear. ****

This recording provides compelling evidence that large organs by Harrison & Harrison really do project the romantic repertoire very well. The performances are authoritative, with appropriately flexible tempi and an empathy with 19th-century style, well projected.